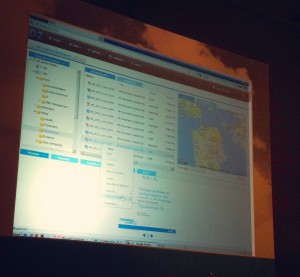 Monday afternoon was spent on a tutorial around Documentum D2 and the new 4.0 version. The new UI is very nice and would make it much easier to demo Documentum without excuses around its UI. As usual it is very impressive to see so many things being able to control from its configuration interface, hit save and it is available to users without a restart of anything let alone the whole server. Since we are running and R&D-activity this will it possible for us to try new concepts and settings out much much faster. However, today I discovered a few limitations in the current release. One is that the structure (layout) of a workspace need to be configured using a plain old XML-file. Sure it is far better than compiling and editing XML is not that difficult but still it will slow down development slightly. Fortunately a graphical interfaces is under development. That workspace structure file is then imported in the workspace configuration interface. Another limitations is that external widgets has only one-way communication which for instance mean that you can use coordinates in document metadata to position a map but not use the map as a search criteria. Support for two-way widgets is also under development and planned for the next release.

I look forward to see support for virtual documents and more collaboration widgets from Centerstage in the next release. As of now I at least spotted a widget called ”CenterstageCommentWidget” in a drop down menu. I also like that nice large dynamic document previews are built with an option to go full screen just as Centerstage (and Alfresco Share). Another nice feature is that all lists for documents or audit events can be exported as Excel files.

Also had a chance to look further in fme Migration Center which is a really powerful enterprise tool that I see can solve several business problems for us. The most obvious one is of course supporting migrations between systems and during upgrades. However, it can also be used to support large imports of content from file shares, USB-drives etc. It includes powerful regex features to set filenames, metadata and folder structures in the target system. The product requires an Oracle database to run but for smaller migrations up to about 500k they seemed to think the Express Edition could be a choice for those on a budget. Another powerful features is the ability to set up a migration path and then run it in simulated mode with no commits to the actual repository.