Reflections on managing digital content in the Enterprise, how analyze it and deliver the insights to others.

I will be a speaker at Momentum 08 in Prague

This weekend I got a nice surprise in an email from EMC which confirmed that my speaking proposal had been accepted. So now I guess I will be going to Momentum 08 Prague as a speaker! It feels great and I look forward to it a lot. Unfortunately it is in the middle of a very important week at work but I got confirmation from my commanding officer today that I can at least fly down for the day to give the speech and possibly also check out the other sessions that day. My sessions is entitled ”Active Knowledge Management using Documentum D6” and will be focusing on how we use Documentum as a foundation to work proactively to support end users in finding, organizing and utilizing their information in a military HQ. Fortunately it looks like we are going to do another major step in taking our platform forward and that will not only include a very early upgrade to D6.5 but I will also get my data-deduplication feature 🙂 It sure will be an interestung autumn.

Today I learned some interesting things about the names and licensing of Documentum products. MediaWorkSpace which was previously announced as included in the DAM license will now require its own license. A little bit strange since it is merely handling image files so far. The Magellan essentials license however will be included in each Content Server license which is good. The full Magellan client (which for a while was called IntelliSpace) will be a separate license when it will become available. I also learned that there are no longer any licenses for Reporting Services developer which limits the number of Crystal Reports designer tools in your system. Instead there are is a CPU license for Reporting Services allowing as many designers as you like in your system. Furthermore I learned that what is labeled Business Process Management includes both Documentum Process Builder and Forms Builder but only used one at the time on one machine. Forms Builder can be bought as a separate license. We had intended to get Forms User licenses but we chose to for some TaskSpace clients instead where Forms User is included. At EMC World we also learned that the Process Engine DocApp is required to run BAM in Documentum D6.5

Grateful for any clarifications or corrections if someone have found out something else. 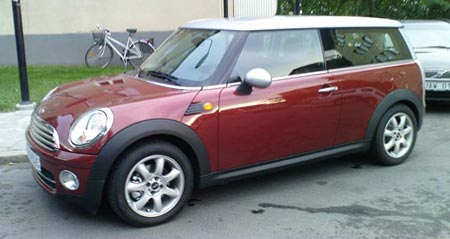 It has been ready for a couple of days but believe it or not but I had so much to at work that I could not squeeze in the time to go to Uppsala to get it. However, today I finally decided that it could not wait any more so I raced to Uppsala in my Mini Cooper S for the last time and enjoyed the big engine as much as I could 😉 When I got to Novation (the name of the car dealer) my sales person was taking it out of the garage just as I rolled in. It looked wonderfully red in the sunshine and I immediately felt it was a good decision. The new car is certified as an environmental car by the Swedish Road Administration (Vägverket) and consumes around half of the fuel per 10 km compared to my old car. It also has cool features such as brake-regeneration of electric power and an ”enviromental” stop feature which makes the engine stop (while everything else is running) when you put the gear stick into neutral. A small touch on the clutch (koppling) makes the engine start again. Highly useful in Stockholm’s rush-hour. The car also has a new iPod interface which is a real improvement over the old one. This one speaks Swedish and allows you to navigate just as you do on the iPod and show the title of the current song in the display. So my car is essentially an iPod accessory 🙂